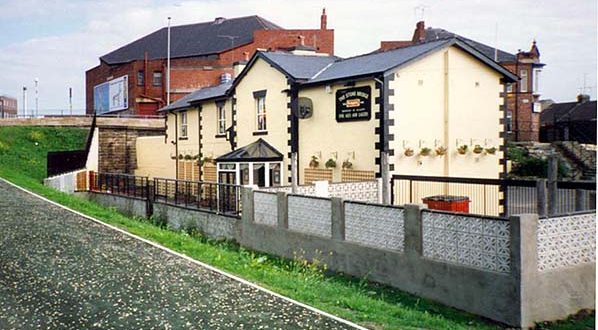 A lot of the lost pubs in the North East give me a warm fuzzy glow as I look dew eyed back on the many happy times I had drinking with my friends.

The Stonebridge is not one of them.

The build-up to my visit to this long-forgotten pub is more interesting than my actual visit there.

Being a student in Sunderland in the mid-‘90s was an existence of fight or flight. Everywhere you turned there was a threat- from the guy walking around outside my student hall wearing boxing gloves looking for students to batter to the almost nightly attacks on the Precinct from the affectionately called ‘psychopath’. It was a bit like the running man but the wardrobe budget only stretched as far as sports direct.

The psychopath ran all the way through Sunderland- it was the quickest way to and from Chester road to the Hylton Road and the student halls around there- about halfway up it there was a lone pub.

That lone pub was The Stonebridge.

To say that the outside of the pub could do with a bit of work is an understatement. The walls had scorch marks, I seem to remember a burnt-out car (though that could just be mental embellishment on my part) near the front door you had to buzz to get into it. It was a dumping ground for the miscreants that were too rough even for the bars along Hylton road.

How rough was it? Well, it got to the point that with the level 99 lunatics in there the owner decided to turn it into the regions (if not the countries) first ‘Student Key-Club’.

Thankfully the locals took this with the good grace students had come to expect- after all the university had already demolished huge swathes of houses where generations of the same family had lived, and they had taken the Welders Club and turned it into a nightclub- So what was one more thing?

To much fanfare in Degrees North (the student newspaper) it was launched and you could pay a deposit for a key and come and go as you please.

One Tuesday morning we decided to take the plunge. Myself and my recently access funded mate decided to do one of our dodgy pub crawls. After steeling ourselves at Mccanns with a pint, chicken curry and chips we set off on our adventure.

We got buzzed in and were surprised to find we had to go upstairs through another door into the bar to be greeted by one member of staff and a very empty bar. In fact, we were the only people in.

It was dark, run-down and had the look of a social club long past its prime. I asked what they had on and the barman responded ‘Brandy’.

Cheap even by my low standards we chucked them down us and got talking to the barman.

It transpired that the landlord had enough of the trouble in the bar after one of the barmen had his collar bone broken by a regular, and- not willing to put his staff at risk anymore- he decided to turn it into a private member’s  Student Social Club because students were ‘No Bother’ … great plans were afoot.

We drank our brandy and promised to return with our mates in tow.

The Stonebridge really tried to make the Student Key club work- ads and cheap drinks, hoping to get passing student in as they sprinted for their lives pursued by locals down the psychopath.

Ultimately it failed and reverted back to the old Stonebridge.  Unfortunately, nobody told the unsuspecting students who found their way in one night and got emptied by some regulars.

The Stonebridge continued to acquire new scorch marks and graffiti over the following years. I used to joke that it should be knocked down and the ground sowed with salt so nothing ever grew there again, but something better happened….

It got demolished to make way for the Metro line.

It is unique in my experience as people would usually lament the loss of a pub and wax lyrical about how it was brilliant. Not The Stonebridge, it seems as soon as it was flattened nobody cared or remembered it. The Stonebridge was absolutely no loss to the City, community or pub culture, I could see no way it would ever redeem itself. Its reputation was always bad and on top of that, it was shit.

For :
– Somewhere to stop for a breather after being chased by Chavs down the Psychopath
– It’s been demolished and no one on the internet seems to remember it.

Old Pubs of Sunderland – The Pilgrim

From a quiet afternoon drink to raucous nights out, The Pilgrim became a regular feature of my nights out.