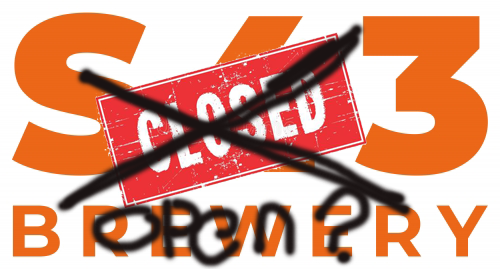 Social media was abuzz with rumours that the S43 brewery was closing… Thankfully, the brewery has denied this with a lengthy, unconvincing post that appeared nearly a week after the rumours first surfaced.

The Beer drop Low Fell first mentioned something about the brewery closing on their Instagram and they were running down their stock ahead of winding up.

After a bit of digging, I was contacted by an industry veteran who told me that the S43 brewkit had been sold two weeks previously to Vaux and that S43 head brewer was looking for a new job.

Then coincidentally the Head brewer posted that he was looking for a new role while S43 was restructured.

Then (5 days after the initial rumours surfaced) S43 took to social media to quell the rumours that were all made up..apart from the bit about them ceasing brewing ( but just for a while) and selling their stock off (too difficult to move) while they moved their brewery. (Which is easier to move than beer cans)

Frankly, It all sounds like complete bollocks. I suspect that S43 will sell off their IP and their beer will be brewed either as a contract brew by Vaux or the S43 brand will survive as part of the Vaux range.