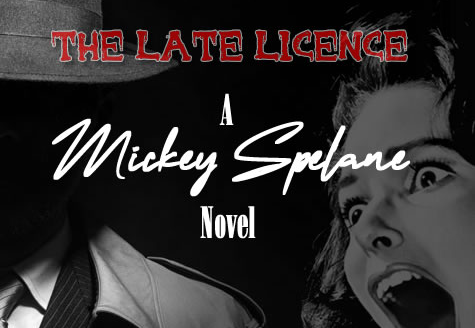 Harry’s- who can’t afford toilet seats, or locks on the bog doors- spunked money up against the wall in hiring a PI to sit in Bayan all night drinking Martinis.

The PI statement was damning in its simplicity:

“I was doing a cheap sneaky job for people I didn’t like, but that’s what you hire out for, chum. They pay the bills, you dig the dirt.

‘My mind wanders to the broad from Harry’s bar who had given me this job. I knew she was trouble as soon as I set eyes on her, a wide clear forehead, serious eyes, high cheekbones, nervous nostrils, curves that wouldn’t quit and a mouth that was giving nothing away.

She presented her hand ’Rachel’ she said, her voice full of passion, promise and problems. A moment seemed like an eternity, the silence seem to grow.

Rachels golden hair glinting in the strip light, fell in a neat ringlet across her eye, breaking the enchantment ‘I have a job for you Mr Spalane’.

With tears in her eyes, Rachel told a torrid tale of a local bar and extended drink licenses. Of course, I took the job it would be easy money…or at least so I thought.

I couldn’t shake her from my mind so I opened my desk and took a swig of bourbon. I could do with a shower, a decent meal and a strong coffee, but I had a job to do and £4.30 dayrider.

So I headed to the Bar.

As I left the office, the heavens opened and the wind was tugging at my coat, I pulled up my collar out of habit because my coat provided no respite from the chill… I headed towards my target.

Planning vantage points, playing through each scenario, but each time my mind was inextricably drawn back to the memory of Rachel, her smile lingered in my mind like her perfume.

I was jolted back to reality as I arrived at the bar, as I was met with a hired muscle. I’d seen his type before, he moved with a cat-like grace which belied his size.

With an easy smile, I approached the door.

The ape looked me up and down,

Full details of the story here