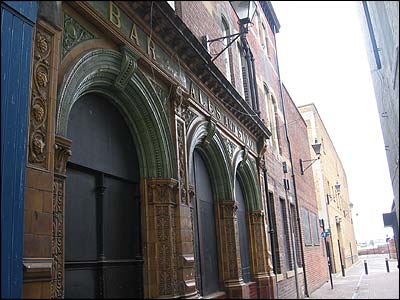 Yes, I know this is out of date by two years

Those of you familiar with Sunderlands alleyways and wearers of shell suits, will not have failed to notice the impressive tiled frontage down the alley near the City Tavern off the High Street. When I was a student, I would often stumble out of the City Tavern, admire the fine frontage of the former Three Crowns and then go for a wee down the back of JJB sports.

JJB sports closed a few years ago, and the building has unfortunately been empty, along with a number of other buildings around Mackies Corner. Now, however, the council are throwing money at the area and a local business has successfully applied for a change of use for the building back to a pub. The company will remove the awful metal cladding and restore the pub front to its former glory.

I have a soft spot for Sunderland, it once had a slew of great boozers along Fawcett Street and it was easy to get absolutely mortal by walking from one end of the small town centre to the other. A number of factors have contributed to its decline- the loss of Vaux, the council’s idea of a night-time economy moving all the nightlife around Parklane and the ill-fated Cheapside and the introduction of the metro.

They also made it more difficult to get licenses for a while so they were transferring them from older established boozers to super pubs (Ttonic, Varsity etc) which completely destroyed the character pubs in the town. Maybe now they have cottoned on that what makes a city interesting is the variety of small businesses and places to go.