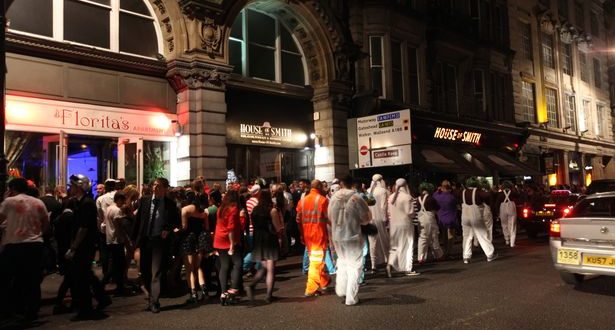 Some bar with some wacky name promises to shake up Newcastle’s drinking and club scene by offering something exactly the same as all the other bars in the area.

The new bar – in the already abhorrent diamond strip – promises to make the area even more intolerable, with a mix of Djs, cocktails, queues, arsehole bouncers and vomiting women.

The owners have a wealth of experience in the leisure and money laundering business, Steve Stabbington spoke to us and said ‘We already have a packed event calendar. Monday is student night, Tuesday night a selection of buskers singing Adele songs, Wednesday night ‘Cheesy Chart night ‘ Thursday ‘Cheesy Chart’, Friday is for after work drinks and cheesy chart music, Saturday promises to be the biggest club night in the north east with DJ Cexoffenda playing all the latest finger banging tunes while shouting incomprehensible nonce-sense over it.’ he continued ‘Sunday will be a lower key where you can chill and relax -We like to call it chillaxing’.

‘Its not just about the Music’ said Mr Stabbington ‘We will be offering a selection of overpriced microwaved food, incredibly complicated cocktails served in a fractional distillation column which need to be drank from an industrial centrifuge, offers on perennial favourite Prosecco, for menopausal women who have grown out of drinking Lambrini, and lager at £5.50 a pint.

Mr Stabbington continued ‘I think this is a familiar offering and we are hoping to attract a similar crowd to Tup Tup Palace, like the Motor Cycle Gunman.’

With the help of local Architects Generic & Co, The new bar will also be joining every other bar in Newcastle by having a roof terrace, because simple beams and slate are not good enough for the clientele, and a VIP Area because nothing says Alpha Dick in a room full of Dicks, more than hiring a VIP area.

Not everyone is happy with the plans – local resident, and person who shares free Virgin Holidays scams on Facebook- Pheona says ‘I bought my apartment above all these bars back when I was in my 20s, because I thought it would be easier to ride the Geordie Shore cast, but now in my mid 20s, I just want a quiet life with my abusive estate agent boyfriend Brett’.

Other residents are equally critical, local ‘character’ Pissy Pete took time off from shouting at pigeons to say ‘I hate it along here now, in the old days people would give me money so I could buy some Brasso or boot polish, now I end the night with 20 cups of coffee and 40 Greggs sausage rolls – Have you ever tried smoking a sausage roll?’

The application for this blight will be going to the council’s licensing committee, early indications point to the council being relieved that it’s not more student accommodation or a pop up something or other.